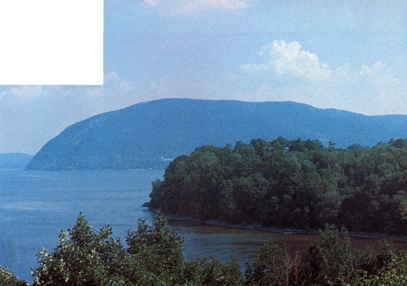 The Scenic Hudson Decision was a 17-year (1963-1981) legal dispute which defeated Consolidated Edison's plan to embed the world's largest pumped storage hydroelectric plant into the face of Storm King Mountain, near Cornwall, New York. The lengthy and controversial case had an immense impact on environmental and legal issues affecting the Hudson River Valley as well as the nation. The landmark case set important precedents in environmental law including: the right of citizens to participate in environmental disputes, the emergence of environmental law as a legal specialty, ideas Congress incorporated in the country's first National Environment Policy Act (NEPA), federal and state regulation of the environment, and it is credited with launching the modern environmental movement.

In September 1962, the Consolidated Edison Company announced plans to build a pumped storage facility, the largest of its kind in the world, at Storm King Mountain near Cornwall, New York. The initial application for license to construct the plant was filed with the Federal Power Commission in January 1963. On November 8, 1963, a small group of concerned citizens met at the home of Carl Carmer and formed the Scenic Hudson Preservation Conference to fight the pumped storage project on the grounds that it posed a threat to the Cornwall water supply, the Hudson River fisheries, and to the scenic beauty and historic significance of Storm King Mountain.

Storm King Mountain lies along the west bank of the Hudson River just south of Cornwall. The name Storm King was coined by 19th century writer Nathaniel Parker Willis. Noting that the mountain was the tallest in the region and an accurate predictor of stormy weather when early morning clouds covered its peak, he felt there could be no better name than Storm King. This name would prove true as the mountain range found itself involved in the most contentious environmental legal case our nation has seen. Thanks to the tireless work of those involved with Scenic Hudson the mountain would come to weather this storm as well. Today the mountain is home to Storm King State Park and thousands of visitors come to hike the trails this historic mountain has to offer. 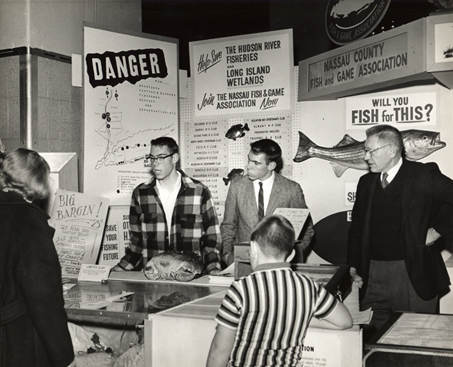 An information booth hosted by the Nassau Fish & Game Association, 1966. From the Scenic Hudson Collection.

Carl Carmer, author of The Hudson River and other historic works, became honorary chairman of Scenic Hudson, Inc. and Leo O. Rothschild was named chairman. Rothschild served until 1968 and was succeeded by Alexander Saunders. Initially, the members, working in their own homes or borrowed office space, contacted friends, prominent citizens, politicians, and other organizations for financial support, letter writing campaigns, and legal intervention. The organization grew rapidly. Contributions were channeled through the Natural Area Council until Scenic Hudson was incorporated in 1974. Rod Vandivert became the executive director in the mid-1960s. An office was set up in New York City, but the location changed several times during the Storm King case and there were a number of office managers during that period. Professional fundraisers and public relations firms were employed in later years.

Aided by other organizations and individuals, the group conducted an intensive campaign to educate the public and to deter Consolidated Edison by legal means. The records, which document the organization's activities, include publicity materials, copies of legal documents submitted by Scenic Hudson and others, and transcripts of hearings before Congressional sub-committees and the Federal Power Commission. The case lasted for 17 years. In a negotiated settlement in December 1980, Consolidated Edison agreed to drop the plan for the Storm King facility.

A rendering of the proposed power plant. From The Hudson River Conservation Society Collection.