Winslow created two or three ponds on his estate, one of which had a small island the same shape as the famed ironclad Monitor. The stream crossed over into the Marist Brothers' property. The Brothers dammed the stream and used the water power to generate 1100 watts of electric power, enough to provide lighting to the former McPherson house. (ed.note I think the electricity was direct current that could be stored in batteries.) From the Brothers' property the stream emptied past the Poughkeepsie Water Works into the Hudson River. 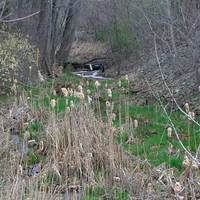