In December 2012, Bob Pomerantz, college electrician, told me he had discovered the outlet for the Winslow stream. It exits this culvert between the parking lot for the Gartland athletic fields and the Poughkeepsie Water Works (along with several other culverts which remain dry except for rain storms - the Winslow stream always flows). The stream follows an overgrown path past the Water Works and Gartland Athletic until it flows under the railroad tracks and into the Hudson River. Although the stream originally found its way onto the Barnard/Marist Brothers land, it was diverted during the construction of the 1980-2000 period to remain on the Winslow property. (Photo taken 6 December 2012). 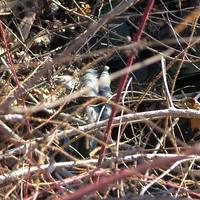