The north entrance to Marist College may see changes in a design by the New York State planners. The photo shows the current entrance, and another set of lights normally blinking yellow about 200 feet north of the main lights.

The blinkers have a sign indicating John winslow Gate Rd. Drivers coming from Hyde Park wishing to shop at the Office Depot/McDonalds/Staples shopping center often make the left onto this road to avoid the main light. The Winslow sign points out the southern entrance to the former Winslow farm east of route nine. The farm was incorporated into the Hudson River State Hospital grounds, but nothing major was ever constructed on the farm, which extends east to Violet Avenue.

The purchasers of the State Hospital filed plans for 900 housing units on the hospital campus. To reduce entries and exits onto route nine, the state planners suggested a connector road on the Winslow farm reaching from route nine to Violet Avenue. All vehicular traffic from the former Hospital grounds would be routed to this connector road, then move to either Violet Avenue or route Nine. The existing traffic lights at Marist College and McDonalds would be closed off. Marist would create a replacement entry/exit about 200 feet north on the former Newbold estate property leading to the new traffic light.

There are two glitches to this grandiose plan. First, the drop in the economy since 2007 has brought new housing in the area to a virtual halt. Second, the fiscal status of the State discourages new roads. I have been told that the parties who purchased the State Hospital grounds now have placed it on the market.

So don't hold your breath... 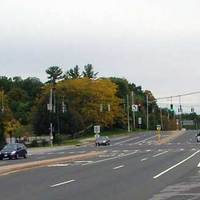