John Flack Winslow (1810 - 1892) became a younger partner to Erastus Corniing in 1837. The two operated the Rensselaer Iron Works and later the Albany Iron Works. In 1860-1861 Winslow engineered the construction of the ironclad ship Monitor for the Union forces. In 1865 he became president of Rensselaer Polytechnic Institute, donating half the cost to a science building in 1866. He resigned the presidency in 1868, after he had relocated to Poughkeepsie NY. 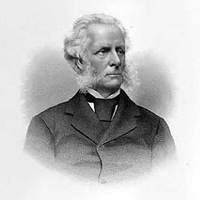