The Poughkeepsie & Eastern railroad first came through Marist lands in 1868-1872. It ran through several stages of success followed by failure followed by success, etc. The last passenger traffic for the Pleasant Valley station occurred in 1937. Since that time the tracks through the Marist property were used to service the Hudson River State Hospital, Western Publishing Company, Shatz Federal Bearings, and several smaller industries, including foundry and slaughter house. Several spurs were built to connect these industries. Most of the spurs are gone, but evidence of their crossing streets like Fulton still exists. This service came from the Hudson River railroad, as the tracks from Pleasant Valley were torn up and the right of way sold.

Today the right of way along this path is owned by CSX railroad. Negtiations have been conducted between CSX and Dutchess County to transfer the unused land to the County for use as a walking trail. 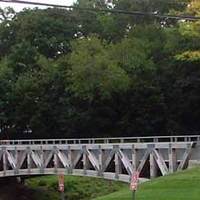