The first picture shows the cannon from the Monitor stands in front of the Adriance Memorial Library entrance along Market Street in Poughkeepsie NY.

THE MONITOR of 1863 fame
the invention of Capt. John Ericsson was the first war vessel carrying am armored turret.
It was made through the efforts of
John F. Winslow and John A. Griswold and with money furnished by them. This cannon made for the Monitor
was presented to the
CITY OF POUGHKEEPSIE by Mary C. W. Black Mr. Winslow's daughter 1926

Mary Corning Winslow Black was the daughter of John and Harriet Wickes Winslow. Mrs. Winslow died in 1926 and Thomas Scudder Winslow and Mary Corning Winslow sold the estate to John Marian. Mary and her husband first lived in Michigan, but by 1926 had moved to California.

The third picture shows the entrance to the Adriance Library faces Market Street. 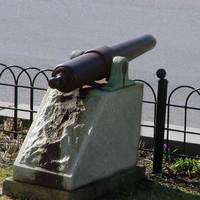 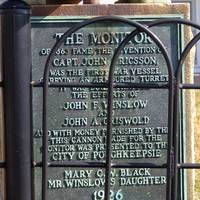 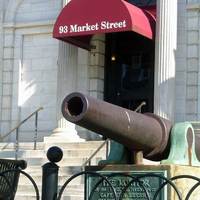