Harriet Wilkes Winslow and her friend Sophie Harris lived in this house in the last few months/years of Harriet's life. Sophie lived here until she died in March 1932. This photo, taken 6 October 2012 shows a two family house. The house to the immediate left was demolished after a fire, and it seems that 247 also may be subject to the same fate.

Why did they move there? My guess is that the Winslow estate was too large for the small surviving group. Thomas Scudder Winslow was a physician living in Newburgh, Mary Corning Winslow Black had moved away from New York, first to Michigan, then to California.

The residence at 247 had some advantages. it was less remote from city activities and medical assistance. (the 1920 census for the Winslow estate lists only Harriet, Sophie, a nurse and a cook). Of all the places to choose, I guess they chose this for its proximity to the Presbyterian Church at the corner of Cannon and Hamilton Street. 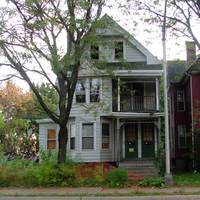