With the completion of the study hall and dining facility, the only remaining function for the old provincial house across the water works road was student dormitories. The wooden building was considered extremely dangerous, so much so that each night some student brothers took turns to remain awake and patrol the three dormitory sections in case of fire.

Brother Nilus Donnelly decided that construction of a three level dormitory using all concrete would take too long, so he switched to steel girders, which went up more quickly, but did not have the loading factor needed to carry library books and periodicals. when the structure was converted to academic use, only the ground floor was used by the library; the other two floors were used as regular student dormitories and later as faculty offices. 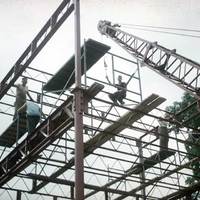