Brother Nilus describes the sloping land west of this gazebo: "The nearest large area available was a hillside behind the present library building. {ed note: when Brother Nilus wrote this, the library had been relocated from Donnelly to the Brothers former study and dining area.} Before the Chapel was built in 1953, there was a continuous sloping field from that location all the way to the present tennis courts. {ed note: these courts were located near the mid rise.} It was a large orchard covered with full grown fruit trees. The topmost section became the site of the chapel, and below it were built the Fontaine study, dining and dormitory. The remaining section was to become the new parking area. Brother Nilus Vincent Donnelly, MEMORIES of 76 YEARS, P. 32. This became parking for 282 autos. It is now the mall area between Cannavino Library and the Rotunda. 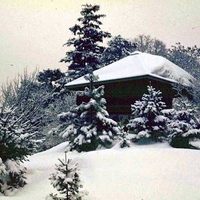