The Byrne House was built in the early days of the expansion of Marist College in 1960. It was built as a residence for the Dominicas Fathers, who were at that time chaplains at the College. After this application, it was used as a location for the campus nurse and counseling activities. At the present time, it is being used as the school ministry and student counseling center. It is located in the back of Champagnat Hall, overlooking the Hudson.

The Byrne house, overlooking the Hudson River, was built in 1960 during the expansion of Marist College. It was used as a residence for the Dominican Fathers who were at that time college chaplains. Later it was used as a location for the campus nurse and counseling activities. Currently it is a being used as school ministry and student counseling center.

Byrne House is named after Brother George Francis Byrne, FMS, who was born in West New York, New Jersey, on December 2, 1908. He became a Marist Brother on July 26, 1926, and came to Marist College in 1949 to teach history. He died at Marist on October 25, 1953, and is buried on campus in the Marist Brothers' cemetery. (Source: Marist College History: Byrne House) 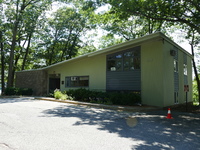