Fontaine Hall was named after Brother Paul Ambrose Fontaine, FMS. President Emeritus and a Life Trustee of the College, Brother Paul played an integral role in shaping Marist during its early years. The original Fontaine Hall served as a study hall and dining room for the student Brothers at Marist College, although its purpose varied as the College expanded. It was constructed by the Marist Brothers in 1956, and later an addition was made to serve as a dormitory for the student Brothers. Subsequently, the addition was used as an office building for the Humanities Division. The original part of the building served as a library until shortly before the Cannavino Library was built. With the decision to construct the Cannavino Library on the same site, the original Fontaine Hall was razed and new Fontaine Hall was built to house the offices of the School of Liberal Arts on the northern end of campus.  (Source: Building & Place Names)

Fontaine Hall was named after Brother Paul Ambrose Fontaine, a long-time Dean and then president of Marist College. Brother Nilus Donnelly supervised a volunteer army of Marist Brothers who worked on building the college during the summer months. College student brothers also worked on the project during the fall and spring semesters, which were lengthened by one or two weeks to allow small teams to help Brother Nilus all year.

During the construction of Fontaine Hall, on a blistering hot summer's day, two groups of student brothers were applying perma-stone to opposite sides of Fontaine. A hose used to wet the cement was accidentally held so that the water arched over the roof sprinkling the other group of brothers. Declarations of war were issued. Both armies met on Fontaine's roof with water hoses and buckets of water. Twenty minutes later the liquid skirmish was over. Both sides returned to work, happy in victory, but also much wetter and cooler.

The original Fontaine Hall was attached to the chapel by a passageway. Long laminated beams radiating out from a single pillar supported the wooden ceiling, mirroring the type of construction used in the chapel. An award-winning curtain of glass allowed for panoramic views of the Hudson River.

The main floor housed a circular study hall with an open space in the center. A room on the north side housed "Our Lady's Library." This collection of books relating to the Blessed Virgin was organized by Brother Cyril Robert, the college librarian. It was absorbed into the main collection when the library was moved to Donnelly. In the northwest corner was a visitor's suite with office, dining room, bedroom and balcony. It was often used for small group meetings.

The lower floor contained a dining room and kitchen which served meals to the faculty and 120 student brothers. Dominating the staircase connecting the study hall and dining room was a unique crucifix. The Christ figure's wrists were nailed instead of the palms of His hands. This scientifically correct approach reflected the Marist Brothers' scholasticism and search for the truth.

Eventually, Fontaine Hall and its addition had to be demolished to make room for the construction of the Cannavino Library. (Source: Marist College History: Fontaine Hall) 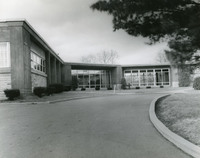 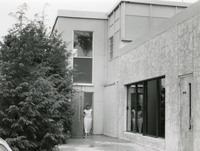 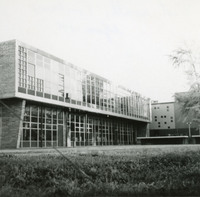 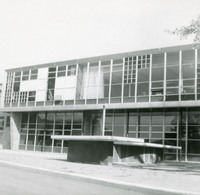 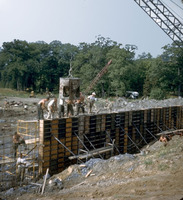