The Library is named after James A. Cannavino, a long-time Trustee and former Chairman of the Board. Developed as part of the worldwide Digital Library Initiative launched by the IBM Corporation to facilitate anytime, anywhere access to books, periodicals, works of art, film, music, and rare manuscripts, the Cannavino Library is a model for academic libraries of the new century. Overlooking the campus green and the Hudson River, this 83,000-square-foot facility is a state-of-the-art electronic teaching and service center at the hub of an electronic network linking all parts of the Marist campus to libraries and databases throughout the world. In addition to providing a number of spacious study areas and attractive quiet rooms for research, conferences, and collaborative work, the Library also houses the Archives and Special Collections rooms, an office overlooking the campus for the College President, and a multi-media language center on the third floor. A small cafe on the main floor of the Library also provides the students with a gathering place where they can have a bite to eat, drink coffee, and not have to worry quite as much about the level of their voices.  (Source: Building & Place Names)

History of the Marist Library

The Marist College Library was originally housed on the top floor of Greystone in 1928. In 1945, reference, periodical and work areas took over the second floor as well, and then in 1949, the Library also claimed Greystone's lowest level. The Library remained in Greystone for 35 years.

The burgeoning library moved from Greystone to Donnelly Hall in 1963. In the space now occupied by the Computer Center and DN256, Donnelly Hall housed what was known as the Spellman Library for the next 12 years.

The Library moved from Donnelly to Fontaine Hall in 1975. It remained there until 1998, when the library moved temporarily across Route 9 to the former Poughkeepsie Steel Plant, purchased by Marist College to house the Library while the new James A. Cannavino Library was constructed.

Dedicated on May 6th, 2000, the 83,000 square-foot James A. Cannavino Library is known for its blending of classical design and 21st-century technology. The three-story structure overlooks the campus green and Hudson River on the west, and "Heritage Plaza,” which connects historic 19th-century buildings and the college chapel, on the east.

The $25 million library houses book stacks and archives on its ground floor; research materials, periodicals and an "e-scriptorium" on its main floor; and a Center for Collaborative Learning on its top floor.  At any of the 600 seats - ranging from individual study carrels to soft-cushioned easy chairs overlooking the Hudson River - students and faculty can access the Marist College network via wi-fi and connect to sources of information on campus and across the globe. Don't own a laptop? IBM ThinkPads® are available for loan at the circulation desk. Collaborative study rooms allow group discussions on projects while quiet study areas offer scenic vistas to go with tranquil settings in which to read.

Academic support functions ranging from a writing center to language labs and multimedia classrooms are just some of the features that serve as a laboratory for learning on the library's top floor. An executive presentation room provides a corporate board of directors' setting, complete with the latest presentation technology offerings.

The Cannavino Library's two-story atrium entrance also features a coffee bar and is a popular gathering space for students, faculty and staff.

The Library is named for James A. Cannavino, a long-time member of the Marist Board of Trustees and one of the country's leading technology visionaries. 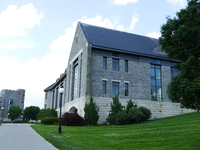 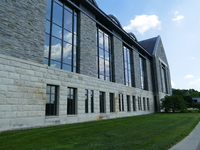 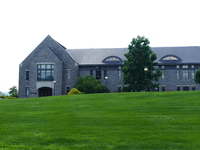