The present Marian building was built as a gym in 1948. This was the first large building put up by the Marist Brothers on what is now the Marist College campus. Brother Francis Xavier, who at the time taught Philosophy and Psychology at the College, supervised the work. "Frank," as he was known, was a man of all trades and as much a contractor as he was a professor.

The building was constructed entirely by the Brothers, with the exception of the bricklayers and steamfitters. The student Brothers helped by mixing concrete for the masons, carrying the pipes for the steam fitters, unloading the trucks delivering the cinder blocks and bricks, doing the carpentry with Brother Paul Ernest (the Professor of Physics), and operating the jack hammer, as well as other such tasks as were needed.

The building was used primarily as a gym with other facilities installed in the wings. These facilities included a carpenter shop, a printing shop, a laundry room, garages, and storage space.

In 1983 the old gym was transformed into a dormitory; the wings of the original building were renovated in order to make a second floor and the gym portion was also transformed into a two-story dormitory. The building stands at the center of the campus and currently houses mostly first and second year students. (Source: Building & Place Names)

The first image at left shows the area of the campus comprising the old gym, the scholasticate and the Greystone buildings. Two wooden frame single story bungalows, built in 1911, occupied the gym area. One burned down in June 1946. The other was torn down in early 1947. They had served as large meeting rooms and recreational facilities. The gym was constructed on that site.

The present Marian building, the first large building put up by the Marist Brothers on what is now Marist College, was built as a gym between 1946 and1947. This work was supervised by Brother Francis Xavier, a faculty member teaching Philosophy and Psychology. "Frank," as he was known, was a man of all trades and as much a contractor as a professor.

Except for the masons and steam fitters, the building was constructed entirely by the Marist Brothers. Student brothers mixed concrete for the masons, carried pipes for the steam fitters, unloaded the trucks which delivered the cinder blocks and bricks, did the carpentry with Brother Paul Ernest (professor of physics) and operated the jack hammer, etc.

The building was used as a gym with a carpenter shop, printing shop, laundry, garages and storage space installed in the wings. (Source: Marist College History: Marian Hall Past and Present)

The old gym at the center of campus was transformed into a Residence Hall in 1983 and is presently used in that capacity. The wings were raised to make a second floor and the gym portion was also transformed into a two-story dormitory.  (Source: Marist College History: Marian Hall Past and Present)

The Marian gym, built in 1947, was the embryo of the present Marist College recreational program and of the "Red Foxes." (Source: Marist College History: Marian Gym) 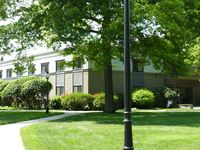 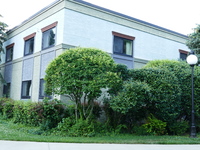 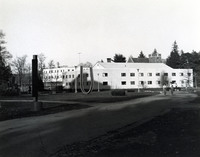 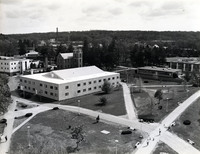 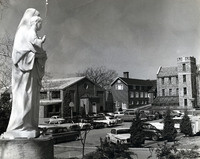