The Martin boathouse was built in 1963 in memory of William Martin who was the chairman for the fund drive to build the boathouse. The boathouse was built to house the rowing and sailing equipment of Marist College. There are two ramps leading directly from the boathouse into the Hudson, which are used to launch the crew boats and the sailboats. Initially, Marist competed in sailing and crew. Blue Jays were used in sailing competition and pleasure sailing for the students and faculty of Marist College. These were 13-foot wooden sloop rigged boats. In 1966 the Blue Jays were replaced by Barnegates, which were 19-foot fiberglass sloops. These could carry up to six people, but were also used in competition with a crew of two. Smaller boats later replaced the Barnegates. Marist crew has been very active in the competitive sports world since the early 1960s.  (Source: Building & Place Names)

Marist crew has been very active in competitive sports since the early 1960s.

In 1963 the Marist boathouse was built and named in memory of William Martin, chairman of the fund drive for its construction. It housed the college's rowing and sailing equipment and the crew boats. The two ramps leading to the Hudson River are used to launch the crew and sail boats which the Marist crew uses in racing and regattas.

Initially 13-foot wooden sloops called Blue Jays were used in student sailing competition and for pleasure sailing by the faculty. These were replaced in 1966 by Barnegats, 19-foot fiberglass sloops. For racing there was a crew of two but the boat could hold six. These Barnegats were later replaced by smaller boats.

For five consecutive years, ending in 1996, the Marist's men crew won the prestigious Haight Trophy by defeating eight other eastern college schools. Marist crew holds an honored position in this, the oldest intercollegiate sport in America. Its crowning achievement was to qualify, in 2002, for the Henley Cup Regatta in Oxford, England. They were defeated in the second round by Harvard, the eventual overall winner. (Source: Marist College History: Boat House)

The William Martin boathouse almost completed in 1963.  The bulwork in the lower part of the photo was placed on land of the city of Poughkeepsie to aid the Cornell and California boathouses, but the Martin boathouse was fronted with huge bolders set by Brother Nilus Donnelly.

View of boathouse row before construction of the Martin Boathouse, taken from one of the unfinished upper floors of the Leo Dormitory.  The California and Cornell boathouses were used by the high schools, and Dutton Lumber began shrinking its supply of aging lumber. 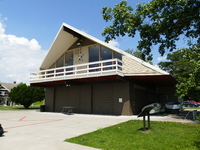 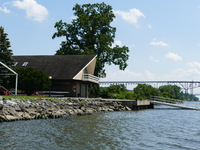