The McCann Center is home to Marist College's intercollegiate, intramural, and recreational athletics programs. The original 57,200 square-foot McCann Center, including a field house, Olympic swimming pool, dance studio, and weight room, was built in 1977 with funding from the James J. McCann Foundation. The McCann Foundation again gave its support to construct a 20,000 square-foot addition that opened in 1997. The expansion features an 11,000 square-foot multipurpose gymnasium, a 4,300 square-foot weight training area, a 4,000 square-foot cardiovascular area, a student lounge and locker rooms, and the electronic Pepsi Athletic Hall of Fame, a multimedia room and computer lab honoring athletes and teams from Marist College and surrounding Dutchess County.

The McCann Center was named after James J. McCann, who was born in Poughkeepsie in 1880. He and his family operated the McCann Feed and Grain Store on Main Street, and McCann eventually amassed a large estate through the stock market. In 1967, two years before his death, McCann established the McCann Foundation, which began awarding money in 1969 for "progressive human welfare work."  (Source: Building & Place Names)

Jack Gartland indicated that the McCann would not be ready to support the McCann Center project for two years, as it was committed to the McCann Golf Course and the McCann Ice Skating Arena at the Civic Center. This gave the college the leisure to plan.

At first we thought of a Butler  building, a pre-fab unit which might easily be constructed.  Paul Canin explored over a dozen different manufacturers.  Richard Foy contacted a specialist in sports arenas from Hofstra University to locate places in the US which had innovative designs.  He and his wife visited Oral Roberts University in Tulsa Oklahoma.

The facility was innovative in that is served occasionally as the venue for the Oral Roberts television shows, which normally were filmed in Los Angeles.  In the times when the show moved to Tulsa, the teams practiced in a basement  under the main floor which had the same dimensions including height as the main floor.

Graceland College, a small college operated by the RLDS (Reformed Latter Day Saints) in Lamoni, Iowa.  The athletic complex together with the student union was housed in a huge oversize plastic dome, with the dome about 12" thick.  The unit had been in operation for five years with no leakage in a very cold section of the country.  Graceland is best known for being the college of Bruce Jenner, the Olympic decathlon champion.

Next he visiter Mercer Island near Seattle, Washington.  Here he saw domes kept upright via air blowers (now similar to many tennis installations).  When he asked a young lady if they ever had snow, she replied that they had about two inches about five years ago.

Laverne College (now University) in La Verne CA about 35 miles east of Los Angeles.  We were shown two tents, one housing a theater, the other a combination athletic center and student union.   La Verne enjoys mild southern California weather, and heating such a facility would be a problem in Poughkeepsie.

So Paul Canin, the architect, issued several request for proposals, expecting that a butler type edifice would be the winning choice. It happened that there was a lull in construction at that time.  A Baltimore regular steel company bid on the project.  It did the engineering  design and won the bid. So Marist has a standard engineered building which has held up nicely for over 35 years.

When it came time to design the interior, Louis Greenspan, who worked with the McCann Foundation, located a large shipment of wood in Maine.  The first floor was designed with an asphalt composition, so the wood was used for the walls.  This gives the interior a distinctive look and feel.   A wood floor was installed later. (Source: Marist College Land History: McCann Center framework)

Soon after the pool's opening in 1977, Marist had to contend with a problem in the design.  Most college pools were two pools, one for diving, and one with a 25yard (or 50 yard) length, as most college meets were run in yards, not meters.  Yet  the move towards metric was beginning.  How to avoid obsolescence yet compete with its current fellow colleges?

The solution was to create one pool, with a moveable bulkhead.  This would permit races at the yard distances but also races at the meter distances. (Source: Marist College Land History: McCann Center Pool) 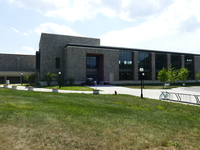 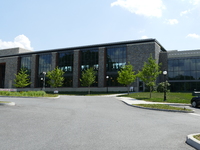 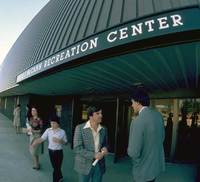 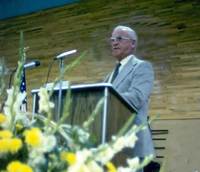 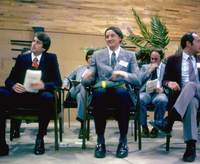 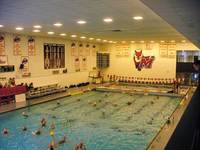