The caretaker's house is sometimes called the Fischbach house after one of the owners who purchased the house from Charles Chlanda after Chlanda bought the Newbold estate in 1946.  It ran through a succession of owners until it was purchased by Marist College.

The building sits close to route nine, just outside the stone wall at the right in this photo. 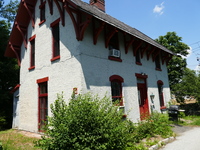 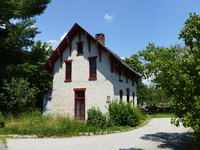