The Scholasticate was nicknamed the "Pullman" because it was used as a dormitory. In 1945 it was decided to "raise its roof" so that the Scholasticate's small attic could be enlarged to accommodate classrooms. Brother Francis Xavier cut the studs holding up the roof and using jacks, he raised and reinforced the roof. (Source: Marist College History: Scholasticate)

Prior to establishing the Scholasticate in Poughkeepsie, student brothers were housed at Saint Ann's Academy in Manhattan along 76th Street.  By 1911, the Scholasticate had been moved to Poughkeepsie, with the student Brothers living quarters in this wood frame house next to Gemstone. The house appears in early photos of Greystone, so it antedates the purchase by the Marist Brothers.  The complex of buildings including this, Greystone, the Gatehouse, and Saint Peters was nicknamed Central and was used chiefly by the student brothers and working brothers.  When student brothers lived there, the building was nicknamed Pullman, presumably because each bed and dresser was separated from the others by curtains, similar to those in use in Pullman railroad sleepers. 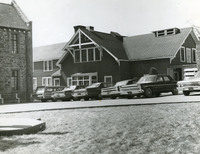 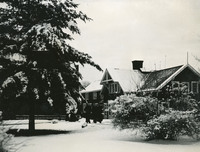 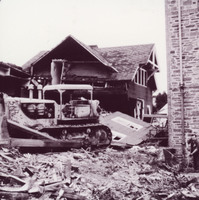