After the Brothers purchased the MacPherson and Bech properties, they swam in the Hudson River, crossing the railroad tracks on foot.  When the New York Central Railroad took land from the Brothers in 1911 to widen from two to four tracks, it took steps to prevent pedestrian or vehicle traffic across the tracks.  It built a tunnel underpass, still in use today, near the water works.  It also provided two foot bridges, one for the Juniors at the north section of the property, and one for the Novices and Student Brothers at the southern division.

The students continued to use the Hudson River for their swimming activity.

This was a small lake near the MacPherson house, noted in Marist Brothers history as the site of a radio controlled toy boat engineered by Brother Legontianus, for whom the Leo Dormitory is named.  He was an electric and radio genius, and the lake became hiss toy playground.

In the mid 1930s the Brothers decided to change this lake into an outdoor swimming pool. They removed the island, kept the general oval shape.

The pool had two diving boards: a standard one meter board and a three meter board from a tower, supports for which are visible at the right hand of this photo.

The pool was located near the provincial house.  this photo shows student brothers walking to the house for their dinner.  The house served as dormitory and dining room and chapel for the student brothers.  The hedges in the photo served as a primitive fence.

This photo taken in 1955 shows the three meter diving board.

The pool was upgraded in the early 1960s with improved filtering systems.  But it did not meet the then current standards for public pools.  The health department allowed it to continue operation until the pool at the McCann Athletic Center was completed in 1978.

The oval design of the swimming pool made it a popular venue for winter skating and hockey.  The Juniorate for French speaking candidates to the Marist order supplied the Poughkeepsie venue with many candidates of French Canadian origin.  Besides the main pool, another temporary pool was flooded in the area behind the Novitiate building on the Bech property.  Candidates from the New York area tended to be more proficient in basketball, those from New England in hockey.  One of my classmates, Paul Arthur LaFleur (class of 1962) , was a member of the US Olympic hockey team in either 1956 or 1960, before professional players were admitted to the games.

The bulldozer is poised to break down the outdoor pool in 1979, after the McCann Athletic center is complete.  The building across the pool was a changing room. (Source: Marist College Land History: Outdoor Swimming Pool)

The Outdoor Swimming Pool.  There was a small lake between the house and the water works road.  Early photos show a small island with a wooden bridge.  This became the playground of Brother Legotianus, after whom the Leo Dormitory is named.  He devised a small motor boat, guided by radio, very early in the history of radio.

In the early 1930s, it was decided to convert this lake into an outdoor swimming pool. The ground proved to be swampy, so to pour the base of the pool, springs from old beds were inserted vertically into the ground, then other springs rested on the first group in a horizontal manner, and the concrete base of the pool poured.  Two intake sections were left open at the deep end to accept fresh water from what was thought to be natural springs.  The pool was deep enough to provide space for a three meter diving board and a lower board. The pool was maintained by the student brothers, with the help and supervision of the personnel from the City of Poughkeepsie Water Works.

During the 1960s and 1970s the pool proved a popular summer meeting place for faculty and administrative staff and their families.  In the 1970s the Water Works repaired some of the pipes leading from the plant towards the city.  The influx of water thought to be natural springs dried up, with only a small flow, probably from drainage from across route Nine.  The pool did not have toilet or shower facilities, but the City did not insist it be closed until completion of the swimming pool in the McCann Center in 1977.  (Source: Marist College Land History: Barnard Parcel) 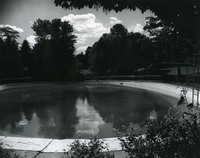 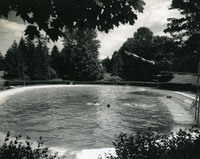 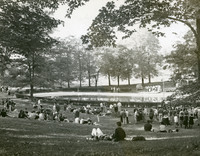 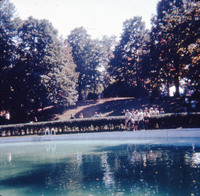 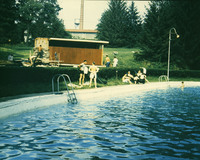 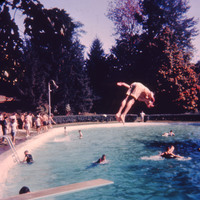