1920
In February the worldwide flu pandemic rages in the mid-Hudson region. Two Sisters from St. Francis Hospital and Dr. Charles J. McCambridge work round the clock to care for our sick. Only one Brother dies, Bro. Michel-Ange.

First automobile garage is built [near the barn on the NW corner of the Juniorate property?].

Calvary group is built near the Novitiate: Christ on the Cross, Our Blessed Mother, St. John , and St. Mary Magdalen. It is a gift of Mrs. Dowd in memory of her son killed in France on 7 September 1918. It is seriously damaged by the 1938 hurricane. It is restored in 1941[?] with a gift from the Marcelynas family, relatives of a Postulant[?]. This restored Calvary is vandalized in the late 60's and the stairs and altar are finally removed in 2001.

1921
A cellar and 3-story extension are added to the west side of St. Ann's Hermitage.

In August, the Brothers pay $28,000 for the 200-acre Wanalancet Farm with its colonial mansion in Tyngsboro, MA , as a bi-lingual Juniorate for French-speaking students from New England . These students join the Juniors in Poughkeepsie for the Postulancy and Novitiate. The first students from Tyngsboro come to Poughkeepsie on 29 June 1925. After serving as a Juniorate from 1924-1949, Tyngsboro serves as the Novitiate from August 1949-August 1968, and thus the Postulants and Novices there take Marist College-accredited courses.

That year he goes to Germany to buy a considerable amount of equipment for physics, chemistry, and biology. [cf. attached biography]

Outdoor Stations of the Cross are erected near the Novitiate Calvary and grotto. They are removed in 1962 to make room for the road to Sheahan Hall. Some Station pedestals are still visible.

A 6-foot-high concrete block wall on the Novitiate property along Route 9 is begun. It is finished in 1923. Two rows of cedars are planted. The wall is removed in 1966 at the suggestion of Mr. John Dougherty, then Director of Development, for greater neighborliness. Some footings are still visible. One row of cedars is cut down with the widening of Route 9 in 1975[?]

Drainage from the Knauss Brothers' slaughter house contaminates our water supply. Our law firm, Coudert Brothers, has to intervene to make them correct the situation.

Ca. 1922, the ice house is removed. [It stood near the dam generating electricity?]

1923
In February, at the suggestion of Dr. Skinner of the NYS Board of Regents, Albany provisionally recognizes our Houses of Formation as accredited Junior and Senior high schools.

It is decided that the Juniors must have completed Second Year of high school to be admitted to the Novitiate. In 1928 this is raised to completion of Third Year.

1924
The Novitiate grotto of Our Lady of Sorrows and adjoining recess of Our Lord in agony are built. The rock canopy and recess are removed in 2001 because of structural weakness, and the area around the Pietà is redesigned and illuminated. 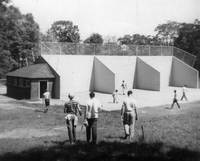 1925
In April two handball courts are put up in the Juniorate playground west of St. Ann 's Hermitage. These stood on a slight bluff east of where Gregory House now stands.

On May 1, Mr. Seymour from the Regents in Albany inspects our high school classes. He is very pleased, and on June 6 Albany notifies us that our high school has been permanently accredited as a Senior High School.

Fordham University authorizes us to give summer courses at St. Ann's Hermitage. These include Algebra, Physics, and History of Modern Times. These are the first college-accredited courses given on campus.

On June 29 the first Juniors from Tyngsboro, 9 of them, enter the Postulancy in Poughkeepsie.

1926
A Mrs. Durnin on Delafield Street leaves the Brothers a legacy of $939.94 and an equal amount to Cabrini Orphanage in West Park , NY . 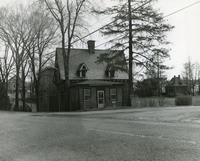 1928
In January, the Annals note that a “Mr. McCann” attends the funeral of Bro. Zepheriny. The newspaper obituary specifies that it is a “Mr. John McCann.”

A cellar and 2-story wooden addition are built on the east side of St. Peter's, and a small room on the west side. [This room will later be called “ Alaska ” because it is unheated?] These additions are demolished in 1969.

Marist Training School is opened under Fordham auspices. In 1929 it is provisionally accredited by the Regents in Albany as an independent 2-year college and is permanently accredited on 9 April 1930. It offers 72 credits toward a Bachelor of Science in Education awarded by Fordham University.

Prof. Bennett from New Paltz Teachers College comes once a week to teach literature to the Scholastics. Rev. Bruce McLean, O.M.I., from the Oblate Juniorate in Newburgh teaches them Philosophy.

Major renovations are started to Greystone for laboratories and a library. A third story is added for more dorm space, together with windows and the tower and stairs. The wooden floors are replaced by concrete floors supported by steel beams. Bro. Paul Acyndinus does the electrical wiring. Cost of the construction: $30,000. Cost of the furnishings: $10,000. The increased area necessitates a new boiler room addition to the west side of “Pullman/Marian” to heat both buildings. The steam laundry in the basement is moved to Marian. In 1947 it is moved to the west side of the Old Gym. It will cease operations in 1983 when the Old Gym is renovated to become Marian Hall, a student residence.

1929
The Scholasticate receives provisional accreditation as a 2-year college called the Marist Training School. The Trustees are the Provincial Council and the President is Brother Provincial, Bro. Legontianus [Leo], at that time. The Master of Scholastics is Bro. Emile Nestor, who becomes “Academic Dean” of the college. Subsequent Provincials and Masters/Deans are:

On 28 November 1958 Dr. Foy becomes President to replace Brother Paul who has been named Assistant in Rome. Dr. Foy resigns in 1979.

On 27 July 1929 the Brothers sell land to Dutchess County along Delafield Street for $6500 for building a highway.