1930
Rev. Bruce McLean, O.M.I., comes twice a week from Newburgh to teach Philosophy. Pierre Marique comes once a week from Fordham to teach the History of Pedagogy; he also teaches at St. Andrew's.

On April 4 Dr. Heisler from the Regents in Albany visits to be sure the studies in the Scholasticate do correspond to the first two years of college. On April 9 final certification by the Regents in Albany of the Scholasticate as a Junior College under the name of “Marist Training School.” These graduates are “approved for admission to the School of Education at Fordham University.”

The Scholasticate playground, today's Champagnat quad, is graded. Cinders are donated by Central Hudson and by the HRSH where a Mr. McGee was superintendent.

The Brothers buy about 5 acres of land in Washington, DC . There is the persistent thought among some that the Scholasticate be transferred or another one added near the Catholic University. (Cf. Annals, p.199) This land will be sold in 1964[?]

A stonecrusher is bought to make material for paving the roads on campus.

1932
The old chicken coop behind the Juniorate barn is converted to a pigpen big enough for 25-30 pigs. The last livestock on campus are removed in the Summer of 1962 after a fire on 27 January 1962 kills about 20 pigs. 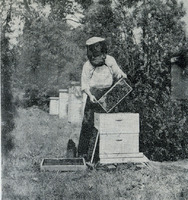 On June 5 Mr. John P. Murray dies. He acted as “straw man” for the purchase of the Bech estate.

On September 27 Bro. Césidius dies. He is the founder of the Marist Brothers in North America . (cf. attached biography)

1935
In April the State donates 2000 small pine trees to be planted on the property.

A 212-feet-deep well is dug in June and, together with the existing system, it supplies all the water needed, even for the gardens and flowers.

On July 10 a tornado knocks down about 150 big trees. The Novitiate handball court is rebuilt.

The Novitiate building is completely covered with artificial brick shingles, improving both appearance and insulation.

The waterwheel basin is cleared of some 75 loads of sediment. Later that year the waterwheel breaks and is repaired by the Fitzwheel people. It breaks again in 1942, and the Brothers repair it. 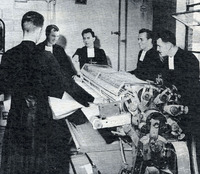 1937
A Printing Shop is started on campus. A linotype is acquired in December 1939. Bro. Tarcisius Vallières moves from farming to printing. He is the college printer until retirement in 1980[?]. The Printing Shop is originally in the basement of St. Peter's, then it is moved to the northwest side of the Old Gym in 1947. Brother prints for St. Francis Hospital as well, and for several others. The Print Shop closes in 1980, replaced by the Copy Room in Donnelly. Bro. “Tarcy” dies in 1983.

The island in the Juniorate lake is removed, with tons of sludge from the lake bed, to transform the lake into a swimming pool. The soil is used to level the ground at the north end of the Scholasticate [along the Waterworks Road, north and west of today's chapel?].

1938
The concrete floor for the pool is poured over the muddy bottom, using vertical bedsprings first, then horizontal bedsprings.

A terrible hurricane devastates New England and knocks down some 30 trees on the property. One of them heavily damages the Calvary group. [A new group is donated in 1941 [?] by the Marcelynas family, relatives of a Postulant]. The hurricane drops 9 inches of rain in 24 hours. The Novitiate is without electricity for three days, and railroad transportation is disrupted for two weeks.

1939
The Juniorate lake is enclosed in a huge [80'x160'] concrete pool. It opens for swimming on June 19. It is 9 feet deep off the diving board and 4 feet deep at the shallow end. It is the biggest outdoor pool for hundreds of miles around. The Dutchess County Board of Health condemns it in 1967, but a Citizens Committee to Save the Marist College Pool raises money for improvements. The pool will be filled in in 1977[?], replaced by the pool in the McCann Recreation Center.

The Scholasticate handball court destroyed in the 1938 hurricane is rebuilt.

A card party in NYC nets $302 for the Scholasticate.

The Marist Brothers buy the 16-acre Ambassador Johnson estate from the Servite Fathers. The property straddles Washington , DC , and Hyattsville , MD. However, it is used only as a residence for Brothers doing Graduate Studies. The Brothers sell the property in December 1963.