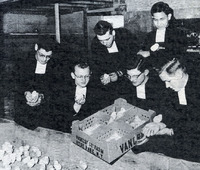 1940
Dr. Charles J. McCambridge dies 9 January 1940. He had served the Brothers for 25 years and was an Affiliate of the Institute [honorary member of the Marist Brothers]. In his last moments he is cared for by his son Dr. James McCambridge, by Dr. Leonidoff, Dr. Boyce and Dr. Ramirez, the latter from NYC.

Fire escapes are added to St. Peter's and the Novitiate.

The Scholastics reap corn given by the Jesuits. The Brothers buy 3500 lbs. of grapes from LaFalce's across the Hudson to make wine and cordials.

A new jack and set of drills are bought to begin work on the foundations of a new Provincial House on campus. However, these new headquarters of the Poughkeepsie Province will never be built, possibly because of wartime constrictions. The Provincial House is moved to Esopus in 1952.

On December 5 there is a fire in the carpentry shop. The shop will be reconverted into a chicken coop in 1943. This coop is removed in 1944[?], leaving only the coop on the Juniorate property.

1941
In March, discussion with the Commissioner of Public Works, Mr. Frank Doran, about the prospective start of a high school in the Knights of Columbus Hall.

In April, the orchard and vineyard west of St. Ann 's Hermitage are removed to extend the Juniorate playground beyond the handball courts. The enlarged yard will allow for three baseball diamonds. Rocks from the WPA project near the boathouses on the river front are used to raise the level of the former vineyard at the rate of 28 loads daily. In May, a raffle for the Juniorate playground improvements nets over $1,000.

In August a new vegetable caveau is built, probably replacing the old one near the barn now destroyed by the Juniorate playground work.

In September the Brothers pick grapes at LaFalce's and Erickson's.

In September the cement floor is poured for St. Mary's dormitory (60'x30') just southwest of the Novitiate, replacing the former Novitiate tool shed. The present site is the end of the Sheahan parking lot approach road, before turning into the McCann parking lot. In Fall 1960 the Marist crew team practices there on a fixed track laid for them. In Spring 1961 St. Mary's will house the first resident students on campus, coming from the King's Court Motel on Cannon Street in Poughkeepsie. Lay students all move after the opening of Champagnat Hall in Fall 1965, and St. Mary's will be occupied by a group of Canadian Brothers of St. Gabriel for 2-3 years. It will be demolished in 1970.

The new Bee House and cannery nearby are built in November 1943. Its curved roof beams come from the roller coaster on Ponty's Woodcliff Park where the Gartland Commons now stand. This bee house was demolished in [1967?].

In December the Provincial Council visits a site in New Jersey for a prospective school or training center. The property is not satisfactory.

On December 24 a Christmas gift of $100 is given a Dr. Leonidoff. He is not mentioned at Christmas 1942 or 1943. A Dr. Aleksei A. Leonidoff gives Marist College $25,000 to develop a football and soccer field; it is dedicated on 19 October 1968. This is the first substantial financial gift to Marist College from a lay person. Dr. Leonidoff also gives Marist College a house on South Hamilton Street in Poughkeepsie, to be used as a Russian Studies Center. This proves impractical and the house is sold and the money given to the Modern Languages Department. 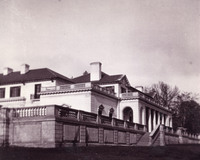 1942
On January 7 and 9 members of the Provincial Council visit two properties for sale.

In February, June and July the Postulants and Scholastics harvest 37 tons of hay from Schmidt's Farm on Salt Point Road, from Millbrook, from Shreve's, from Cookingham's, and from the Jesuits. In September, so much corn is reaped on campus that some must be left standing.

In March a public telephone system is installed, replacing the intercom campus one put in in 1911.

On 26 February the General Council in Europe approves the purchase of the Raymond C. Riordon property, “with school and buildings located about 12 km from Poughkeepsie,” but on March 18 Bishop McIntyre of NYC rejects our request, and Msgr. Sheehan in the Chancery suggests alternatives. On May 20 members of the Provincial Council visit two other properties, the Jacob Ruppert [now Linwood] in Rhinecliff, NY, and the Payne Estate in Esopus, NY. On June 26 Archbishop Spellman approves the purchase of the Payne Estate east of Route 9W. We decline to purchase the acreage west of the highway. [The Chancery thus prevents us from making a tragic mistake. The beautiful log-cabin buildings of the Riordon School west of Chodikee Lake inland north from Route 199 on the way to New Paltz have since deteriorated, and the property is today a somewhat dilapidated and unappealing Jewish camp on the west shore of Lake Chodikee.] Four Brothers occupy the Esopus mansion on July 10. Renovations begin on July 14. The deed is signed on August 2, Juniors are accepted later that month, and the old Juniorate in St. Ann 's Hermitage is closed. The new Juniorate is called Marist Preparatory. The Prep is blessed on October 25 by Right Rev. Charles D. Wood, Protonotary Apostolic from Middletown and Msgr. Martin J. Drury, P.R., from Kingston. The Prep closes as a Juniorate in August 1963 and moves to Marist Hall in Cold Spring until June 1969. In Fall 1959 Esopus becomes also the Novitiate until August 1969 and as such offers Marist College-accredited courses. In 1969 the Novitiate and Scholasticate stages of formation are transferred to after college age.

On May 4 the Scholastics sing for Mrs. Rohan's funeral. They had often picked apples for her, in exchange for “seconds.”

On 29 November 1942 the Scholastics sing on the Catholic Hour, broadcast out of the Nelson House in Poughkeepsie. From the earliest years the choir was much in demand. It sang often at St. Peter's, HRSH, St. Francis Hospital, St. Mary's in Wappingers Falls, in Middletown. The midnight Christmas Mass on campus was always packed, and eventually tickets had to be issued to control the demand.

In November the waterwheel breaks again and this time the Brothers repair it.

In June also the carpentry shop is reconverted into a chicken coop.

In August Bro. Paul Ambrose Fontaine is named Master of Scholastics, becoming thereby unofficial Dean of the Marist Training School. The Provincial Council gives him the mandate to transform the 2-year college into a 4-year college.

The Student Brothers become for many years the “blood bank” for St. Francis Hospital.

In September the Scholastics pick apples in Wappingers Falls . Obviously these able-bodied, hard-working, and honest Brothers were much in demand for hay-making, apple-picking, and grape-harvesting before the era of illegal immigrants.

On 5 November 1943 St. Peter's Parish in Poughkeepsie acquires approximately 9 acres of land east of Delafield Street from the Poughkeepsie Savings Bank “for general public and community purposes.” On 27 June 1960 St. Peter's sells this land, known as Shamrock Field, to Marist College for $1. In 1967, at the urging of Dr. Daniel Kirk founder of the B.A. and M.A. in Psychology, Marist donates 5 acres of this land on the upper mesa to the county for a Mental Health Center . The land on the lower mesa will become the MDS Labs.

1944
In January the tailor shop is moved from crowded Marian to the old Juniorate.

On February 1, Dr. Roy J. DeFerrari, Secretary General of the Catholic University of America in Washington, DC , visits. He reports on February 24 that the Marist Training School has been officially affiliated to C.U. and makes many very useful suggestions for improving the courses of study.

On June 30 9-year-old Thomas Secor from St. Peter's parish drowns in our pool. From the beginning, keeping unsupervised local people out of the pool was a serious problem.

In July, a bumper bean crop (some 200 bushels) is picked in the bean patch on and near the Chapel hill.

In August, Bro. Leo retires to Esopus. He dies in 1962. A committed educator, a visionary leader, founder of the 2-year Marist Training School, forerunner of Marist College. Leo Hall is named after him in 1963.

In September the Postulants and Scholastics pick over 1200 bushels of apples in Charles Beck's orchard on Manchester Road. The working Brothers [assigned to manual labor rather than to teaching or administration] pick 2 tons of grapes in one afternoon.

1945
Our Lady Seat of Wisdom is declared official patroness of the Scholasticate.

Bro. Francis Xavier Benoit raises the roof of the “ Pullman ” to accommodate classrooms.

On September 9 there are 31 Scholastics: 4 in Third Year, 15 in Second Year, and 12 in First year. They are the first students to start the new 4-year B.A. program. The Brothers who graduate do so in 3 years and 3 summers.

On September 20, the Regents in Albany provisionally charter Marian College as a 4-year institution for the training of Student Brothers. This date is now known as “Founder's Day.” The name “Marian” is picked by Bro. Paul as a combination of the Brothers' two main patrons, the Blessed Virgin Mary and her mother St. Ann.

Bro. Paul invites John J. Gartland, Esq., as advisor. He will serve three Presidents. He becomes a member of the new Board of Trustees in 1969 and serves many years as Chairman. He is affiliated [honorary member] to the Marist Brothers in 1973. Marist College awards him a Doctorate of Humane Letters honoris causa in 1980. He retires in Spring 2000 and is elected Life Trustee. As Chairman of the McCann Foundation from 1969-2000, he is deeply involved in the development of the physical facilities of Marist College and in establishing the McCann Scholars program for needy Mid-Hudson high school and college students. He dies on 24 August 2003.

Dr. John Schroeder, Ed.D., Quaker, is hired part time to teach English. He comes fulltime in 1949. He is the first fulltime lay professor at Marist. His house in Pleasant Valley suffers a serious fire in November 1946, and the Scholastics and Bro. Paul Ernest clean up the debris and water damage and rebuild the house for him. Dr. Schroeder receives a Doctorate of Humane Letters honoris causa in 1973 and retires in 1975. He dies on 26 March 1996.

1947
On January 30 Dr. John S. Allen and Mr. Fred Morse of the Regents in Albany visit for two days.

The second bungalow, built in 1911, is removed to make room for the new gym.

Four Student Brothers graduate on August 9? This is the first graduating class.

Bro. Francis Xavier Benoit directs the building of the Old Gym. Estimated cost: $214,000; but built for $90,000. Besides the gym it houses a classroom in the NE wing, the print shop on the NW wing, the steam laundry on the west, the carpentry and plumbing shops on the SE wing, and garages in the SW wing. The building is heated by the boiler in Marian, which also heats Greystone. This gym is renovated in 1983 as Marian Hall and becomes a student residence.

To raise money Bro. Paul asks Bro. Francis Xavier to write a novel, but he declines.