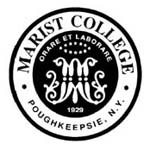 1950
Marian College receives its “absolute” charter from Albany . At the same time Albany reminds the Trustees that the college is authorized to admit lay students as well.

1951
On October 14, the Provincial Council [Board of Trustees] votes 4-1 against accepting outside students into the college. The Council members at that time are: BB. Thomas Austin [Provincial], Henry Charles, Louis Omer, Linus William, and John Lawrence.

Dr. Mooney of Albany asks the Trustees to reconsider, in light of the serious need locally.

1952
Bro. Nilus Vincent Donnelly comes to Marist to teach Physics and to direct the expansion of the physical plant. Donnelly Construction Company will be the contractor for the Seat of Wisdom chapel, the old Fontaine Hall, Adrian Hall, and Donnelly Hall. Bro. Nilus is College supervisor for Sheahan, Leo, Champagnat, and the first Townhouses, and Consultant for the Gartland Commons , Lowell Thomas, and Dyson. He leaves Marist in August 1988 to retire in Florida ; he dies in Miami on 19 December 1990. Donnelly Hall is dedicated to him on 19 October 1991.

St. Ann 's Hermitage is turned over to the Scholasticate, and the Provincial House moves to Esopus. It is such a firetrap that Bro. Paul names 2 Scholastics a night to patrol it until they relocate to the old Fontaine Hall in 1957. The Hermitage is burned down on 23 October 1958. The 15-acre Way Estate north of campus is bought in 1996[?] and, at the suggestion of Dean Cox, it is also named St. Ann's Hermitage. 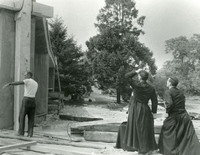 1953
Our Lady Seat of Wisdom chapel is erected. Estimated cost: $216,713; but built for $75,000. The altar with the relics of the martyrs SS. Urban and Felician is consecrated by the Most Reverend Thomas J. McDonnell, coadjutor bishop of Wheeling on Saturday October 24. The chapel is dedicated by Cardinal Spellman on Sunday May 2, 1954. Its circular design was most probably inspired by the Catholic chapel at Logan airport, well known to Bro. Nilus. Another circular chapel existed at Auriesville NY in honor of the North American martyrs. The Scholastics carry the huge laminated beams from the railroad spur at Duso Chemical on Fulton Street to the Chapel hill , stopping all traffic on Route 9. Because of Bro. Paul's deep devotion to the missions, he installs statues of St. Thérèse of Lisieux and St. Francis Xavier in two of the chapel's niches. [The statue of St. Francis Xavier will be replaced by that of Blessed Marcellin Champagnat after his beatification in 1955?]

1954
Cardinal Spellman dedicates Our Lady Seat of Wisdom chapel on Sunday May 2. The chapel was built in 1953 by the Brothers to commemorate the Marian Year in 1954, Centenary of the proclamation of the dogma of the Immaculate Conception.

1956
On November 12, the Provincial Council [Board of Trustees] vote 4-1 to accept outside students into the college. The decision is approved by Cardinal Spellman on 11 February 1957. At that time, Bro. Linus William Hall was Provincial, and his Councillors were BB. John Lawrence O'Shea, Paul Ambrose Fontaine, and Leo Vincent Wall. Bro. Mary Andrew was Econome, and Bro. Nicholas Mary was Supervisor of Schools. One of the two latter must also have had a vote. 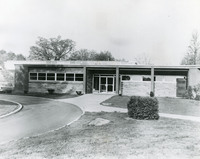 Adrian Hall is built alongside the campus road just west of Donnelly Hall as a Student Lounge. Estimated cost: $75,100; but built for $30,000. In 1967 it will serve as the first Computer Center . The Registrar's Office and Business Office are relocated there as well. It is named Adrian Hall after the death of Bro. Adrian August in 1960 in honor of this former Master of Scholastics and long-standing Professor of Chemistry and Music Master. It will be removed when the Champagnat quad is redesigned and repaved in 2001 [?].

The water tower near the old barn in the NW corner [now approximately Townhouse “C”] of the former Juniorate property is dismantled.

Marian College admits 12 fulltime male lay students. Those who complete the course of study will be the first non-Brother graduates in 1961. The Provincial Council allows the College to add lay Trustees. 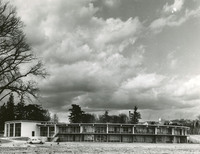 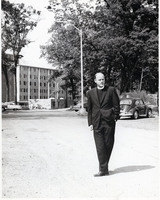 1958
On Monday May 12, after blessing the old Fontaine Hall, Cardinal Spellman breaks ground for Donnelly Hall, named after Bro. Nilus Vincent Donnelly. Estimated cost: $1,719,034; but built for $800,000. Cardinal Spellman donates $15,000 for the library there. Donnelly opens as an academic building in Fall 1960. It is dedicated in 1962 by Bishop Edward Dargin, former student of the Brothers in NYC.

On October 23, the old St. Ann's Hermitage is “accidentally” burned to the ground.

On November 28, Bro. Linus Richard Foy, doctoral candidate at the Courant Institute at NYU, is appointed to replace him. At age 28, he becomes the youngest college president in the United States . That semester there are 256 students, 62 of whom were laymen.

Dr. Ewall Nyquist of Albany urges Bro. Paul to review the objectives of the college, so as to better serve the growing number of lay students. In 1958 also IBM asks that the college establish an Evening Division for their workers.

1959
An Evening Division is started in the Fall with Dr. John Schroeder as Dean.

The first resident male students are admitted. They are housed in King's Court Motel on Cannon Street in Poughkeepsie in the Fall, then move to St. Mary's in Spring 1960.