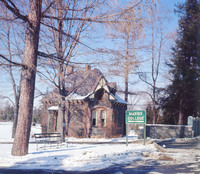 1960
Because Marian College connotes a women's college to most prospective students, Bro. John Malachy, Director of Admissions, suggests we change the name. The Brothers consider such names as “ Poughkeepsie College ,” “ Mid-Hudson College ,” etc. Bro. John Malachy proposes “Marist,” known throughout the world. The name-change is approved by the Provincial Council, then by the Regents in Albany.

In Fall 1960 the south side of Donnelly Hall also becomes a student residence. In Fall 1962 Sheahan Hall is opened, but St. Mary's and Donnelly continue to house students who then live in Sheahan in 1962, Leo in 1963, and Champagnat in 1965. After Spring Semester 1965 resident facilities in Donnelly Hall are eliminated.

1961
North-South arterial highway construction south of campus fills the South field free of charge. In Fall 1965 Prof. Brian Desilets opens a ski slope, together with a ski tow, in the gully behind the Novitiate where the Sheahan and McCann parking lots now stand. The ski slope disappears shortly after 1970[?] when the cemetery is covered over and the gully begins to be filled for the construction of the McCann Center , which opens in 1977.

On 25 April 1961 the Brothers transfer the Sheahan Hall lot to the Marist College Educational Corporation to facilitate obtaining an HHFA mortgage.

The old Juniorate barn is torn down.

Byrne Residence, the William H. Martin Boathouse, and Leo Hall are built. Byrne is named after Bro. George Francis Byrne, recently deceased Professor of History, and the boathouse after William H. Martin, prominent local Catholic who led the fund-raising for the boathouse and who died 18 October 1963. Leo Hall is named after Bro. Leo, former Provincial who started the 2-year Marist Training School in 1928, accredited in 1929, which becomes a 4-year college in 1946.

The Leo Hall lot is transferred to the Marist College Educational Corporation for mortgage financing purposes.

The campus sewer lines are connected to the city systems on Route 9. 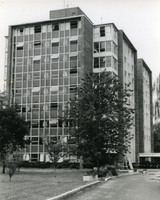 1964
The first lay Trustees are appointed: Harold Spencer, Alexander Aldrich, and John Roosevelt. Orin Lehman is added in May 1965 and Joseph Dean Edwards in June 1965. Three more are appointed in June 1967: McMullen, Griffin , and Garrahan. The Board now has 8 Brothers and 8 laymen. By 1968 lay Trustees outnumber the Brothers and Harold Spencer is named the first layman Chair. 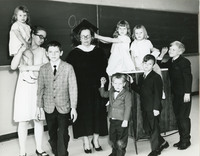 1966
The Novitiate wall along Route 9 is removed, at the suggestion of Mr. John Dougherty, then Director of Development, for greater neighborliness.

1967
The first mainframe computer is installed in Adrian Hall. The Registrar's Office and the Business Office are also relocated there.

1968
Two cluster houses are built for the Student Brothers. The Student Brothers occupy both houses in Spring 1969. They are named shortly after construction. Benoit House honors Bro. Francis Xavier Benoit, professor and builder, and Gregory House is named after Bro. Joseph Gregory Marchessault, professor of Physics who died of cancer on 26 May 1969. Benoit is occupied by the Student Brothers from Spring 1969 to Summer 1970. It then becomes a lay student residence hall. From Fall 1969 to Summer 1972 Gregory House is occupied by the faculty Brothers, then it also becomes a lay student residence.

Leonidoff Field is dedicated. It is named after a distinguished local psychiatrist, Dr. Aleksei A. Leonidoff, our first significant lay benefactor who donated $25,000 for the field.

The Marist Brothers' Novitiate is transferred from Tyngsboro MA to Cold Spring NY.

Marist College-accredited courses continue to be offered in the new Novitiate. 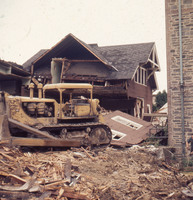 1969
On the recommendations which two professors at Columbia School of Law made to Fordham University, the Marist Brothers transfer ownership of the rest of Marist College to the Marist College Educational Corporation with an independent Board of Trustees. This was prompted by various reasons: to free Religious for mobile apostolic activity, to promote the role of the laity asked for by Vatican II, to qualify for Bundy money, to disengage the Brothers from financial liability, etc. The Provincial was Bro. Kieran Thomas Brennan, and his Councillors were BB. Patrick Magee, Conan Vincent Dinnean, David O. Kammer, Bernard A. Garrett, Linus R. Foy, and Richard A. LaPietra. The Bundy Report had been preceded by the “Land of Lakes Conference” held in 1967 in Michigan, at which time the Men and Women Religious Orders had agreed to separate themselves from the direct control of their bishop in order to facilitate state and federal funding.

At that time, lay trustees outnumber the Brothers on the Board, and Harold Spencer is named the first layman Chair.

Because of the Blaine Amendment on the separation of Church and State, Marist College is refused Bundy money, passed in 1968 and funded in 1969. Marist will again be turned down in January 1970, but approved in 1971.

The east and west wooden additions to St. Peter's are demolished. The “Pullman/Marian” building is also demolished. [?]

On 15 June 1969 the Marist Brothers purchase the house at 2 Eden Terrace as a residence for faculty Brothers. It is rented to Dr. & Mrs. Anthony Cernera, Vice-President for College Advancement, in 1982 and sold to them in 1984. The Cerneras sell it to Marist College in 1988 when Dr. Cernera is named President of Sacred Heart University, Bridgeport , CT.

The Marist Brothers officially end the Scholasticate Formation stage. Candidates to the Brotherhood will now be admitted only after post-college age. The Novitiate will follow college and at least two years of candidacy spent in apostolic work. The last Student Brothers on campus are BB. Eugene Birmingham, Daniel Cronin, and Gerard Geoffroy, from the Profession Group of 1968. The first two graduate in 1971, and Geoffroy in 1972.