The Adrian building was named after Brother Adrian August who was a Chemistry and Music professor at Marist College. This was one of the buildings constructed almost exclusively by the Marist Brothers, and was completed in 1957. It was a small one-story building located across the road from Donnelly Hall. Its first use was as a place where students could meet with guests. Day students used it as a place to study, eat lunch, and relax. It contained a sitting room, an entertainment audio center, and an office for Brother Nilus Donnelly. In later years it served the needs of the Alumni office and the Marist Poll. It was removed in 2000 for the construction of the James A. Cannavino Library. The commuter lounge was moved to the Student Center and the Alumni office and Marist Poll were both relocated to the new Fontaine Hall. (Source: Building & Place Names)

Adrian Hall was built in 1957 by the labor of the Marist Brothers. In his concept for Adrian, Brother Nilus Vincent's design philosophy is evident. Its cantilevered structure melded peacefully into the landscape, as if it were in love with the ground. Brother Nilus designed Adrian so that it was aligned with nature through its sweeping horizontal lines. Adrian was not only an enclosure of space, but it was also a shelter for the spirit of man. (Source: Marist College History: Adrian Hall)

The Adrian building, named after Brother Adrian August, long time chemistry teacher at Marian College and organist and choir director for two decades, was built as a student lounge for the lay students attending the college and as a reception hall for parents of student brothers who visited the college.

After completion of Donnelly Hall, Adrian became the residence/office of Brother Nilus Vincent Donnelly, the Admissions office, the Business Office, and the first computer center.

One of the more popular sites in the early Adrian building was a high fidelity section designed and installed by Brother Nilus Donnelly.  The equipment was state of the art in 1958.  The brown sections at each side behind the chairs held enormous woofers, tweeters and mid range speakers.  The volume could carry the length of the building, so these chairs were placed in front only for the picture. (Source: Marist College Land History: Adrian Building 1957) 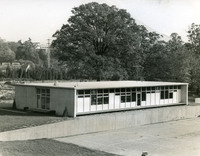 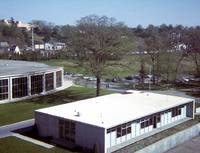