1904
22 December: certificate of incorporation of the Marist Brothers. 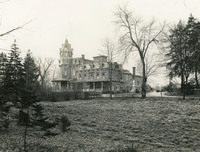 1905
The Brothers look at properties in Westchester and in the area of Esopus, but these prove unsatisfactory. On February 28th, the 35-acre Thomas J. MacPherson property just north of the Water Works road is bought for the Marist Brothers, a teaching order founded in France in 1817 by St. Marcellin Champagnat, S.M. It is said that Bro. Zepheriny, who had founded St. Ann's Academy at 76th Street and Lexington Avenue in 1893, knew the Jesuit Fathers nearby at St. Ignatius church and school at Park Avenue and 84 th Street, and it was they who suggested he contact the Jesuits in Hyde Park, NY. Advised by Rev. Joseph Havens Richards, S.J. of St. Andrew's, (Bro.) Louis Zepheriny [cf. attached biography], helped by his sister, buys the McPherson Estate for $7000, plus some $2000 in incidental expenses. In 1908 he will sell it to the Brothers for $100, and the Brothers will assume the rest of the mortgage. The purchase was made in order to establish the first house of studies in the United States to train future Brothers. The mansion is in a terribly sorry state, but the grounds are attractive, and there is a small lake fed by a spring of clear water, with an island in the middle. Bro. Zepheriny names the new property St. Ann 's Hermitage in memory of Champagnat's Hermitage in France. (N.B. The Jesuits bought St. Andrew's in 1897, and their novices moved there in 1903. They moved in 1963 and sold 80 acres in 1970 to the Culinary Institute of America.)

The Brothers had first come to North America in 1885 and were well established in St.-Hyacinthe and Iberville, Canada. The first Brothers came to the United States in 1886 to start a school in Lewiston, Maine.

The MacPherson mansion is orientated east-west, with the eastern end where the south third of Dyson Hall now stands. There is a small pond near the mansion fed by a spring. This pond was located immediately to the north of the Lowell Thomas Communications Center.

1906
On 21 February 1906 12 Juniors arrive from St.-Hyacinthe, Canada, to begin their studies. They are the first students on campus.

The Brothers begin farming and gardening, herding cows and pigs, and raising chickens and pigeons. Rabbits are added later. There are as many as 10 cows in 1940, over 200 roosters in 1943, over 30 pigs in 1962. The last livestock on campus will be removed in Summer 1962 after a fire on 27 January 1962 kills some 20 suckling pigs. The Brothers grow a variety of vegetables. There are gardens here and there. In 1942 Bro. Abelus gets a new greenhouse along the Water Works Road just north of the chapel, and in November 1943 Bro. Adolph has a new cannery and apiary next to St. Mary's, a small dormitory just southwest of the Bech homestead. There are vineyards in several locations, west of St. Ann's Hermitage and later on the Bech property. Corn is grown in the field between St. Peter's and the Kieran Gate House and on the land now occupied by Donnelly Hall and Donnelly parking. Later, strawberries will be cultivated where the baseball infield now stands and they are amply fertilized by barrels of liquid manure. Fruit trees dot both properties.

1908
The Brothers buy the 65-acre Bech property just south of the Water Works road for $26,500 [$35,000 according to Bro. Azarias]. The money is loaned interest-free and anonymously by a local Irish benefactress. The loan is repaid by 1913. Because of anti-Catholic sentiment and because the city was thinking of buying it to use as a park, Mr. John P. Murray of Coudert Brothers in NYC acts as “straw man” for the Marist Brothers. The deed is signed on 23 July 1908. On 27 August 1908 he sells it to the Brothers for $1.

The Water Works Road went to Route 9 through the St. Peter's parking lot. It was angled north to meet the traffic light at Fulton Street when the Lowell Thomas Communications Center was built.

The Bech homestead stood on the small grassy slope immediately to the north of the very short east-west access road to the Sheahan parking lot. The homestead was torn down in 1963.

January
14 students officially begin their Postulancy on 26 January 1908. This stage of formation followed the Juniorate and represented a higher level of study, as well as basic training for religious life.

September
In September at the request of Father [later Monsignor] Joseph Sheahan, 3 Brothers join the Sisters of Charity to teach at St. Peter's Grammar School in Poughkeepsie . These Brothers reside in the Gatehouse, then called “The Château.” In August 1910 they move to the Gardener's cottage thenceforth called “St. Peter's.” The Brothers leave St. Peter's School in 1936. Bro. Louis Omer's 1933 project to open St. Peter's HS (1926-1936) to the region as a Central Catholic High School was never realized for various reasons, but primarily because of the death of Msgr. Sheahan on 2 November 1934. Our Lady of Lourdes High School is opened in September 1958 and is confided to the Marist Brothers and the Newburgh Dominicans.

The Novices move into the Bech homestead, renamed “The Novitiate,” on 25 September 1908. 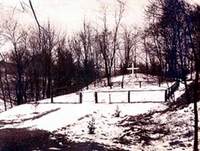 1909
A grave is blessed at the south end of the Bech estate to bury Bro. Charles-Camille, 23-year-old Assistant Master of Novices; he dies of meningitis on Sept. 1. A cemetery will be definitively delineated and beautified in 1913, and a wall built around it in 1921. It is filled in 1953, and a new cemetery is blessed in Esopus. The Poughkeepsie cemetery is covered over around 1970 because of the building of the McCann Recreational Center . It now lies under the NE corner of the McCann apron. Just south of the cemetery was “hobo town,” where migrants stopped on their way to and from Florida. They plied the East coast from Maine to Florida, begging meals at the various religious houses. The Juniorate regularly fed them, most often after having them weed the garden for an hour. “Hobo town” was also destroyed when the area was filled in.

A steam laundry is installed in the basement of Greystone. It will be moved to Marian in 1928, then to the west side of the Old Gym in 1947. It will cease operations in 1983.