1910 - Summer
Tents serve as dorms and classrooms for summer courses.

Swamps west of Central are drained because of mosquitoes. Central is the first name given to Greystone and adjacent building. The latter is later called the “Pullman ” because of the Scholastics' lodgings, and finally Marian Hall. Marian Hall is torn down in 1967?

August
The 5 Brothers teaching at St. Peter's move from the Château to “St. Peter's.” Two working Brothers remain in the Château.

1911
In March the Province of the United States splits from the Province of Canada and thenceforth has its own administration. Bro. Ptolemeus [cf. attached biography] is named Provincial.

One public telephone on campus. BB. Legontianus [Leo] and Aloysius Mary build an intercom system linking all buildings. It will serve until a public phone system is installed in March 1942.

The dry stone wall along Route 9 on both properties is rebuilt by hired workers because of its poor condition. Part of the MacPherson Estate wall still stands, extended in 1999 with the building of the new Fontaine Hall.

Hired workers also dig a well in the field south of St. Peter's.

A 12-inch transit conduit is laid and buried from the Juniorate lake, through the adjoining field on the West, across the Waterworks Road onto the Novitiate property and empties southeast of the city water basins. Digging is done by the Novices.

In May 1911 two bungalows are built south of Marian Hall. They measure 72'x27'x15' at the peak. One collapses under 4 feet of snow in December 1915; it is rebuilt. These bungalows house retreatants and Brothers during the summer. 70 Brothers arrive on 1 July 1911 for summer courses. Later one bungalow serves for storage and the other as a gym. The storage bungalow burns down on 25 June 1946 and the other, used for basketball, is removed in 1947 to build the Old Gym.

A bigger (90'x16') chicken coop is built just south of Central. The smaller coop is moved to the southeast of the new one, to the site later occupied by Adrian Hall. Part of the new coop later becomes the carpentry shop, but is reconverted to a chicken coop in 1943. It is removed in 1944[?]

1912
In December, for $1 “and other considerations,” New York Central buys 4 parcels of land totaling approximately 6 acres from the Brothers to widen its tracks. The railroad company has two iron bridges built at the Juniorate and at the Novitiate for access to the Brothers' land along the Hudson . In 1960 Marist buys some NY Central land at the south end (where McCann now stands) and the railroad removes the iron bridge to the North. The bridge to the South is removed in 1980[?]. 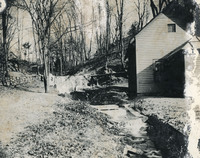 1913
The Brothers build a dam west of the St. Ann 's Hermitage [MacPherson mansion] vineyard and playground to create a waterfall which drops 17 feet and turns a waterwheel to generate electricity for St. Ann 's Hermitage, then eventually for all the buildings. In November 1916 the Juniorate [MacPherson mansion] will be the first building to have electricity. The generator will also pump water to all the buildings from a 65-feet-deep artesian well, newly dug nearby. The water runs off to the Hudson River through a 900-feet-long 11-inch conduit. A 10,000-gallon water tank is raised near the barn (site of the Townhouse “A” block).

A silo is built near the stables at the NW corner of the Juniorate playground. It measures 20'x10'. Another 10' are added in 1917. 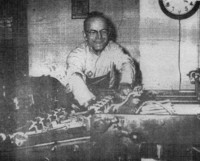 1914
The private water system is completed at a cost of about $2200, and the city system is turned off, thus saving much money. The Brothers were paying double the rates because the property was outside the city limits.

St. Francis Hospital , incorporated 17 December 1913, accepts its first patient on 17 February 1914. It is run by the Franciscan Sisters founded in Philadelphia, PA in 1855 by St. John Neumann in 1855. From the start the Sisters and the Brothers collaborate closely. The Brothers grow vegetables for them, and they go door-to-door to solicit funds for the hospital's expansion in the early 20's. Later, Marist faculty serve as instructors at the School of Nursing, both faculty and student Brothers become a “living blood bank” for the hospital, and Marist Press under Bro. Tarcisius prints much of their printing. In return, the Sisters, for close to a century gave the Brothers the best hospital care possible.

A second vegetable caveau [cellar] is created by blasting in a rocky mound near the Juniorate barn. A first one already existed on the Bech property in 1908 in the hill north of Greystone.

1916
Major modifications are made to the Bech homestead. It is enlarged, a chimney is added, the façade is raised to join the two towers at either end, and a new roof is put on.

Outside workers wire St. Ann 's Hermitage for electricity. The first current flows on November 5. New fire escapes are added. From 1905 to its demolition in 1958 the old wooden MacPherson mansion was a firetrap.

In the Fall the water conduits from the Juniorate to Central are replaced, about 2000 feet. The labor is provided by the Juniors, Novices & Scholastics.

1917
Centenary of the Founding of the Marist Brothers, 2 January. (cf. attached poem by Bro. Dacianus)

28 October the statue of the Immaculate Conception [Our Lady of Lourdes] is blessed and placed in the Juniorate grotto. This grotto will be removed in 1976[?]. 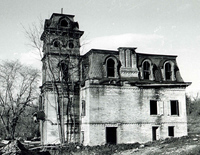 1918
Work is begun on the cement basin to receive the water from the stream coming from the Winslow property. John Flack Winslow, who had designed the gun for the Monitor of Civil War fame, bought an estate at Wood Cliff off North Road north of Poughkeepsie in 1867. He died there in 1892. By 1930 a Poughkeepsie resident, Fred Ponty, acquired the estate and developed the Woodcliff Amusement Park This 25-acre park closed in 1941 after 3,000 visitors from New York City rioted and battled the police. The Brothers bought the western half, and the eastern half was bought by the Costanzi Construction Company to store its heavy equipment. Marist College acquired the entire former park property in 1980[?] to build the Gartland Commons.

1919
In February the final installation of electricity is made in the Juniorate dormitories.

The Juniors take Regents Exams, supervised by St. Ann 's Academy, NY, with which the Juniorate is now affiliated with permission of the Regents in Albany. From 1911 until 1919 exams were taken with the students of St. Peter's in the city.