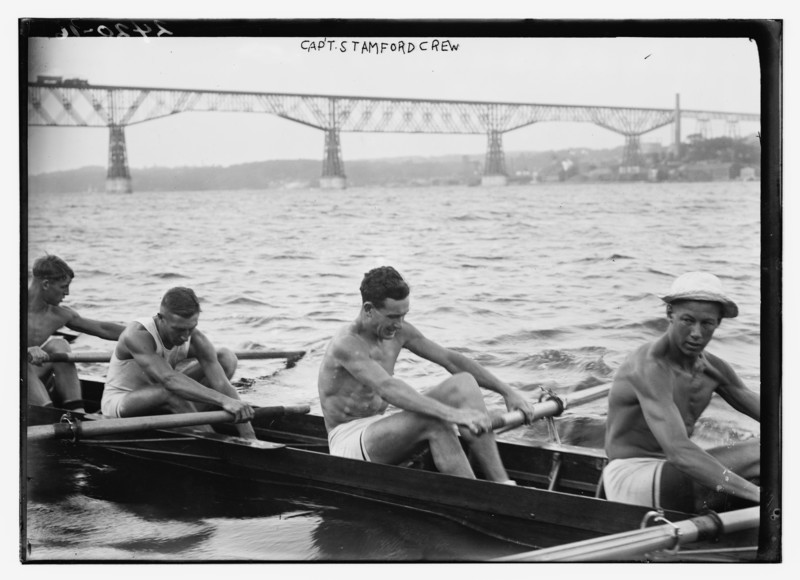 Leland Stanford Jr. University, more often known as Stanford University, had a thriving crew program long before they came to Poughkeepsie.  They frequently participated in races with the University of Washington, the University of California, Berkeley, and others.  Along with Washington and California,  the Pacific Coast Regatta, was created  and winner would go onto race in the Poughkeepsie Regatta (the IRA would not allow a West Coast school to participate until they had organized a rowing association).  Stanford won the Pacific Coast Regatta in 1912 and sent an entry to Poughkeepsie.  Stanford's varsity crew arrived at Poughkeepsie without a coach or shell and crew captain Seward was standing in to guide his crew.  Cornell's Coach Courtney offered coaching advice and guidance to them and Columbia lent them a shell when theirs failed to arrive.  Despite this help, Stanford finished in last place.

Stanford returned to Poughkeepsie in 1915 with another win at the Pacific Coast Regatta.  This time they arrived better prepared with a coach and had their best performance at Poughkeepsie, finishing second and were actually in the lead until Cornell overtook them.  This would be their last time participating in the Poughkeepsie Regatta until after World War II as they were unable to raise the funds to send a crew east and in fact could not afford to have their shell shipped back to California in 1915.  Poughkeepsie and Highland citizens would arrange to have it returned.  Ultimately, the crew program disbanded several years later until its revival in 1947.  The crew returned to Poughkeepsie in 1949 and placed 10th out of a field of 12 universities.

The Color of Life is Red: A History of Stanford Athletics, 1892-1972 by Don E. Liebendorfer