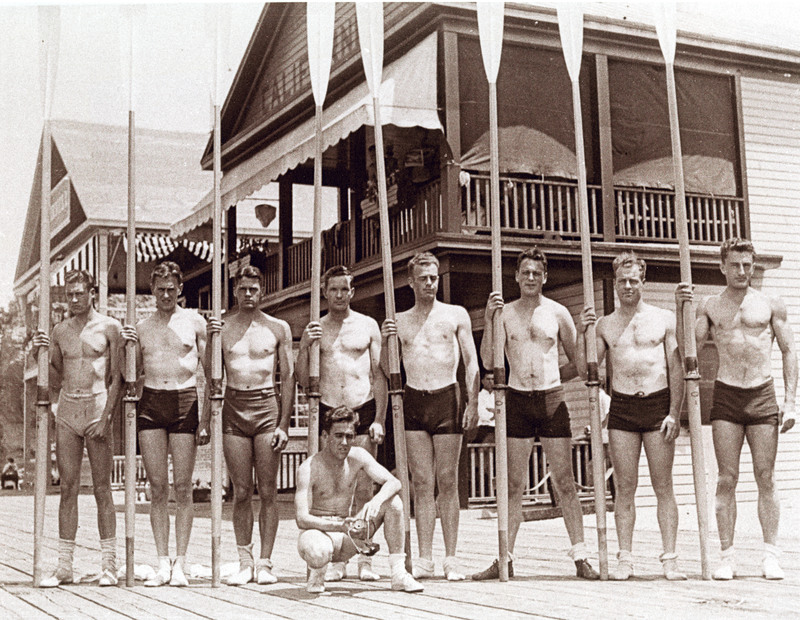 The University of Washington Huskies began competing at Poughkeepsie in 1913 as the winner of the Pacific Coast Regatta, the second university to do so, Stanford University sent a crew previously.  Washington had attempted to send a crew to Poughkeepsie prior to this in 1908 and 1909, but funding and rowing politics prevented their attendance.

In 1913, they placed 3rd in the varsity race, a good showing for their first time on the Hudson River.  Washington returned in 1914, but after this, their coach, Hiram Conibear, refused to bring another crew East until the eastern crews would compete on the West coast.

Washington returned to Poughkeepsie in 1922 and attended each year, regardless of whether they won the Pacific Coast Regatta.  In 1923, they won the varsity race, the first West coast crew to do so.  They won 3 varsity races in total in the 1920s, establishing themselves as formidable competitors for the East coast crews.  But it was in the 1930s that the University of Washington crews began to dominate.

In 1936,  they were given a boathouse on "Regatta Row," formerly occupied by MIT and a dining hall was built for them next door signifying them as permanent participants in the Poughkeepsie Regatta.  Washington won the varsity, junior varsity, and freshman races, a feat previously accomplished only by Cornell.  They went onto victory at the Olympics in Berlin that year and became known as "the Boys in the Boat."

The world champions returned to Poughkeepsie in 1937 and again won all 3 races.  Washington remained a regular particpant and strong competitor until the end of the Regatta's tenure on the Hudson River.

The Boys in the Boat by Dan Brown

Rowing a Race is an Art Not a Frantic Scramble: University of Washington Crew, 1902-1977

Way Enough: Recollections of a Life of Rowing by Stanley Richard Pocock